So, the roadshow has moved on from Chennai to Pune, with an early alarm for 5am set on Sunday morning (11:30PM in the UK, so i caught the tail end of some weird twitter chats), cabs and flights booked and all that needed doing was:

Well, that was the plan anyway, the local microbes had another idea and weren’t too interested in what I thought.

It’s Tuesday afternoon as I write this and they’re still having fun with my system, twisting invisible knives inside my intestines and making sure that I don’t stray too far from the comforts of the bathroom.

The trip to Chennai airport seemed much longer than the journey in and was only brightened by the fact that it was daylight and I could see all the things that I’d missed in other journeys, but I was genuinely glad when I got there.

Despite it being a domestic terminal and my ticket clearly being for an internal flight, the uniformed jobsworth at the door to the terminal took great delight in checking my passport, before pronouncing my airworthiness with a flourish that I completely ignored, now totally in thrall to the microbes and their daggers.

Check-in was smooth, as was security and I managed to get seated in the lounge in plenty of time to eat and drink … er nothing.

Still, the flight was on time and my seat was in the first row, so all eventualities were covered.

The flight itself was smooth and on time.

Getting off the plane and being asked for my boarding pass was a novel experience, as was walking past half a dozen planes on the tarmac to get to the entry gate.

Still, it didn’t take very long, my bag was the third on the belt  and the hotel driver was waiting for me when I exited the airport and drove me smoothly and efficiently through the chaotic traffic to the hotel, where the security guards seemed both more alert and friendlier than my previous stay.

Check-in was ready for me and had a document ready to sign and I was looking forward to crashing and sleeping through some of the pain.

Strangely, I had to wait 15 minutes for the room, but was eventually shown to a good quality business-class room with all the amenities, I unpacked as quickly as I could and decided to go for a quick orientation walk.

Pune at first glance was very different to Chennai, the roads are wider and cleaner, the area that I am staying in houses two hospitals, a police station and an Ashram, it’s all very pleasant, they even let trees grow in the roads and pavements, strange, quirky and somehow OK on such wide roads. ﻿

Huge birds of prey circled overhead as I walked and I was in quiet awe of their size and gracefulness, often stopping to look up and just watch as two or three of them floated past, looking for prey.

After thirty minutes or so, I went back to the room and started to doze, only to be woken by the phone.

“Are you packed and ready sir?”

“Yes sir but you are in the wrong room”

“Nothing sir, we just put you in a holding room until yours is ready”

Fifteen minutes later, a porter arrived to take my freshly packed belongings to my new.

It’s huge, far too big and around 75% of the price for a smaller room in Chennai. Entrance hall, Lounge (with dining table, sofa , desk and a huge TV), dressing area, bathroom with a huge bath and steam-room shower – and a huge bedroom. ﻿ 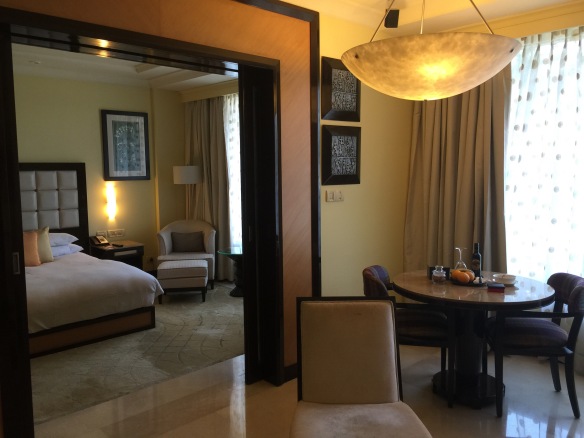 They’d left chocolates and fruit and wine as gifts, sadly all I could face was water.

I felt miserable and slightly lonely having left all my friends and colleagues behind in Chennai and with a week of being alone and possibly unwell in front of me.

I unpacked again and then decided to get my head down and doze for a few hours, waking up around 830PM local time, still feeling delicate but knowing I needed to eat something..

The hotel (the Taj Blue Diamond – I genuinely recommend it) has three restaurants and a bar, I headed for the Chinese restaurant as the safest option and set about navigating the menu, reluctantly eschewing alchohol and asking instead for mint tea.

The head waiter saw that I was occasionally wincing and asked if I was OK, we then discussed the best options on the menu for me and I ordered a chicken soup with lemon and coriander with sweet and sour pork as the main dish.

The mint tea was made with fresh leaves, with a tiny bowl of honey on the side and the food – though deliberately spiceless was delicious, all three or four mouthfuls of it..  The head waiter, Ganesh ( I have already made it a point to write and thank the hotel group for his help) said that the best thing for the morning would be some yoghurt and banana and duly went to get my bill.

He then returned with a perfectly packed bag of bananas and wished me a good night’s sleep.

I felt genuinely humbled by his solicitude and the extra effort that he and his whole team had gone to – all for one sickly westerner and went to bed feeling somehow less lonely.