And so, we move back round full circle.

I’m back in my cottage in the hotel in Chennai, having just spent a long day trying to get the various factions of our dysfunctional little project to play nicely and maybe NOT send emails that they think nobody will see (duh).

And yet, I’m actually quite happy – a few things happened in a very short period of time that in themselves don’t mean anything, but actually added up to me genuinely crying with laughter earlier today.

The last time that I wrote, I was off to Delhi, more accurately, Greater Noida – a huge building site that is on a scale hard to imagne in the UK. Miles and miles of new office parks, satellite towns and roadworks – maybe 200 square miles plus.

The hotel was.. OK. adequate.. Excellent staff but. 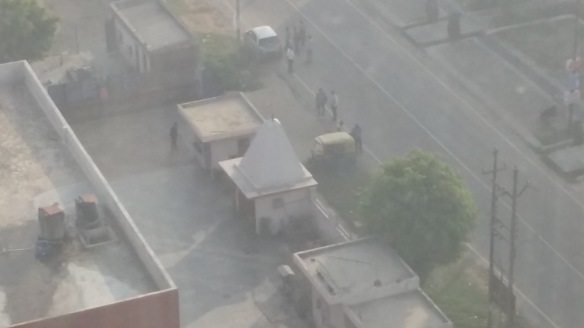 I tweeted that it was the next location for The Walking Dead and I’m standing by that, it was genuinely awful outside and I could never quite be bored enough to go for a walk.

The local office was amazingly welcoming and made sure that my two day agenda was compressed into one so that I could sightsee and shop a bit, they also gave me a guide from the team who I now owe lunch as he paid on my one breakaway from the table..

So we saw the parliament, “Old Delhi” and this man who strangely didn’t seem to want any money… 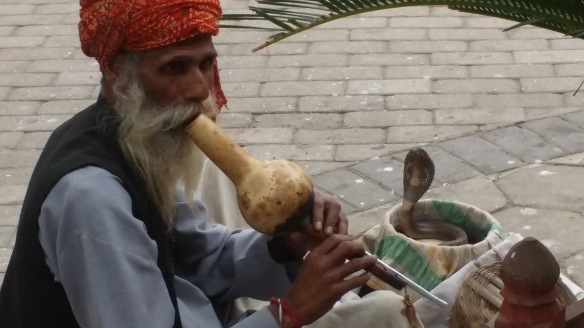 On Saturday, I went to Agra, so that’s the Red Fort and the Taj Mahal.

And the self trolling started again.

I woke up at 6 for an early start and after five trips to the toilet felt safe enough to get in a car for two hours.

I dozed for the time that I wasn’t doubled over with cramp on the joureny down and my excellent and very professional driver got us there before 830 AM to beat the rush.

Somehow;  we also picked up a “complimentary’ guide who would take me round the sites.

The most pressing thing for me though, was:

We’ll divert from my gastric problems here for a second.

The official site of the Taj Mahal estimates between 2-4 MILLION visitors per year – Indians pay @£5 each, Foreigners pay @£7.50 each.

So at a conservative estimate, £10m in revenue per year.

All for a glorified headstone.

Anyway, I paid my £7.50 and was then allowed to visit the bathroom.

I had to pay for a few sheets of toilet roll..

Let’s gloss over the dank, filthy horror that I then entered and thank all the dark gods for the fact that my system was empty, because, let’s remember those maths.

At least £10m in revenue PA, with volunteers undertaking specialist work for repairs.

You’d think they could have a flushing toilet.

Anyway, the trip was interesting, I’ve now seen the romantic Taj Mahal and the less romantic prison opposite where Shah Jahan was locked up by his 4th son in a palace coup for the last four years of his life. 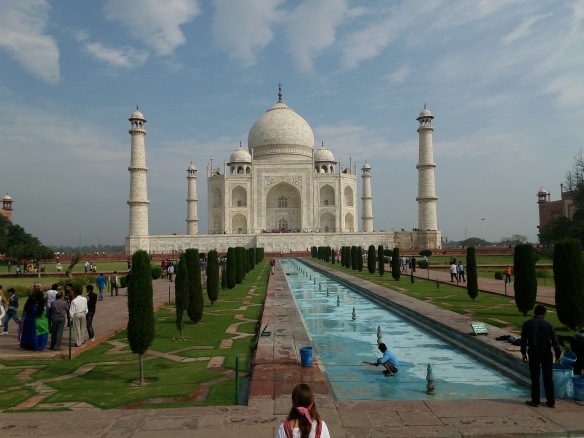 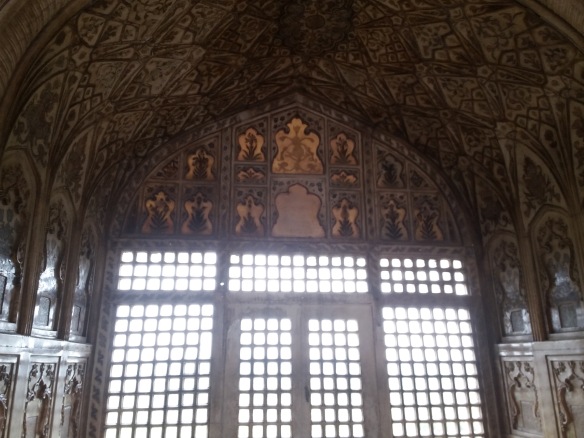 I also watched (still doubled over with cramps) – old fasioned craftsmen make wondrous things from marble and semi- precious things and then spent a small fortune buying gifts, probably over the odds, but you know.. provenance and things.. 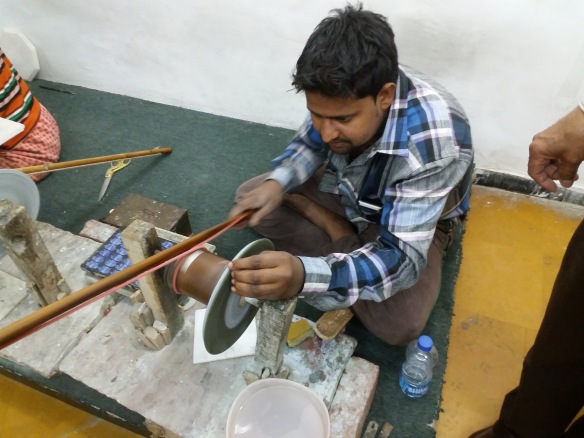 I was glad to leave though, Agra is a genuine shithole, given it was the seat of power for a Muslim king, the sight of pigs roaming the streets was ironic but not at all funny.

Once back in Noida, I went to bed, until Sunday and packing time.

The flight was delayed by an hour, normally no big deal but an old friend was meeting me at the hotel having driven down from Bangalore.

I got in the hotel car and retreated to Twitter for amusement and this is where it all picks up again.

Innocently; I tweeted that I was back in Chennai, only to be confronted by @antichrist_666 telling me that I’d die here.. Abuse went back and forth, I forgot the time…

And arrived back at the hotel to be greeted by my old friend and a group of new friends from the (mostly) German contingent of the project who made a show of bowing and scraping as I arrived.

I may have possibly had a huge smile on my face..

We had dinner and drinks and I sort of forgot that I hadn’t eaten for 48 hours, so the vodka worked very, very well.

All too soon, dinner was over and my friend began the long journey back to Bangalore and it was time for me to actually check into my room. A stunning location overlooking the sea and at least 30 yards away from the nearest neighbour, so pretty much ideal.

I unpacked, brushed my teeth and tried to crash, noticing a small rivulet of water heading toward the door, whether from the sink or the toilet, I couldn’t be sure – and didn’t care.

I woke up early this morning, ate a tiny breakfast and breathed a huge sigh as I settled back into the life of sunbathing, swimming in the surf and chilling.

For the last ten minutes, I wore a T Shirt in the pool to avoid the almost inevitable first day back sunburn and then washed my shirt and shorts in the sink.

With a rivulet of water running down the floor.

Thinking that I’d help maintenance out, I took this photo. 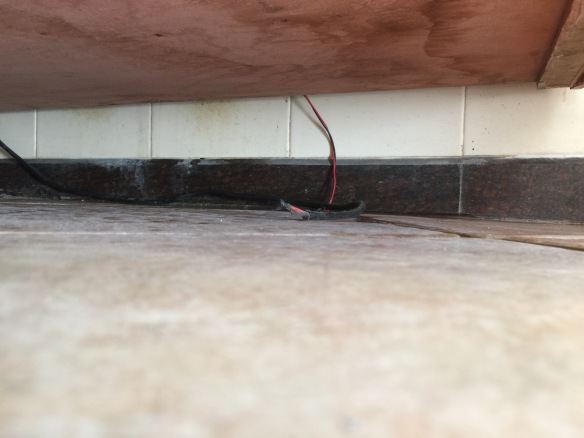 Water and a bare wire.

Which shouldn’t have been funny, but made me remember THIS:

﻿And started a whole new line of abuse

All of which ended with me in literal tears of laughter in the middle of a facetime chat and feeling that whatever the next few weeks hold; that life is still fun and every day holds a promise of sorts.

You made a potentially dull return to a hotel into something I actually wanted to write about. .. Thank you. 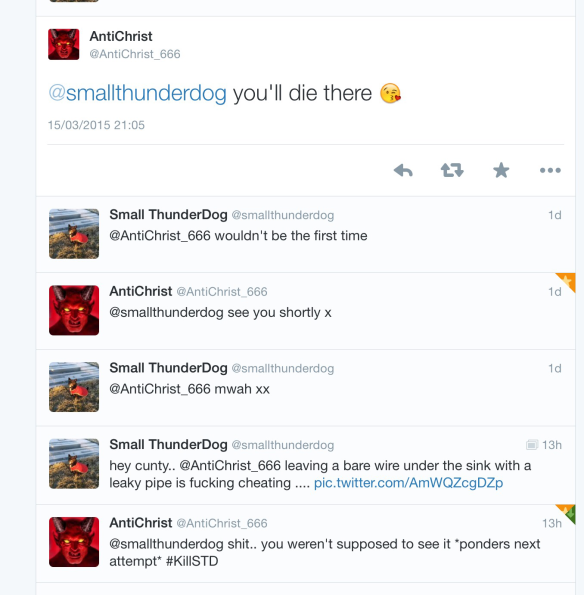